Veda was dancing, and Snowy thought she wanted to play.

(She really didn't want to play with Snowy.)

These images and a few more can be seen here:
http://s26.photobucket.com/albums/c111/SandraDodd/india/week2/HalloweenParty/?start=all Feel free to lift or link.
Posted by Sandra Dodd at 4:04 PM No comments:

Not really on the road, but parallel parked, in Pune, Friday, October 29.  "Elephants are auspicious," Hema said.  So people will come up to touch or see (not ride) the elephant, and give the owner money.  Apparently.  I think. 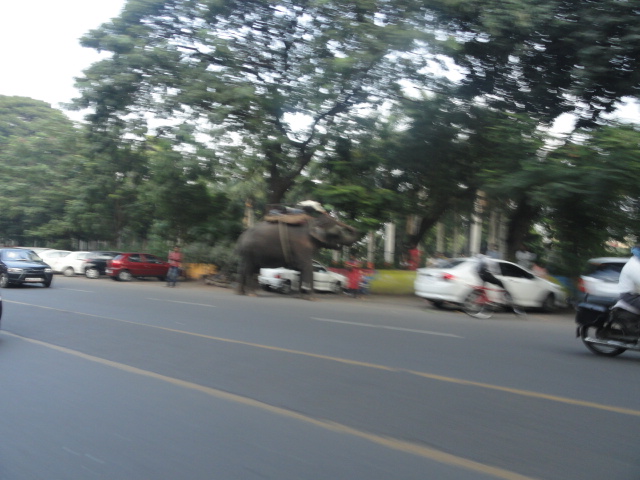 Sorry it wasn't a clearer photo, but I really wasn't expecting to see an elephant, and stopping wouldn't have been safe.
Maybe I need to start expecting to see things, and have my camera at the ready every second.    I have missed three examples of four people on a scooter, because I was unprepared.  (Twice, two of the people were children.  Once three of them were.)
Posted by Sandra Dodd at 3:45 AM No comments:

These were from the trip last Wednesday--not the destinations or special sights, but snaps taken as we travelled on the road of various things. Some I recognized and some I wondered about. There were mile markers, animals, people, buildings, and a curve had a concrete barrier (guardrail-style) painted with gold and black stripes.

There was roadwork, with guys pouring hot tar from an oil can of sorts, into cracks in the pavement, and other guys throwing sand on it. We passed three hot-tar stations, with a fire under a barrel, and strips of old tires. I think they were melting the tire rubber to get the tar for the cracks, but I'm not sure. I think if they had been using the rubber for the fire there would have been stench and smoke, but there wasn't much smoke, so it was probably a wood fire under the barrel. (Or possibly cow dung? I don't know how hot it burns.)

That fuzzy monkey thing in the car is a CD case.

They're not great photos, but they will remind me of what I saw. There's a temple in there, and a wagon, and a guy plowing with a wooden plow. People really can't stop the car every time I see something I've never seen before.

Posted by Sandra Dodd at 3:05 AM No comments:

Just outside of town, women were drying clothes near the river.

We drove some more, and there were always people, buildings, animals, vehicles... we were never totally away from people or dwellings.


Because it was farther that we had expected, Raghu got hungry. The rest of us had eaten guava we bought at the toll booth, but he hadn't wanted any. In a much smaller village, we stopped in front of a store, so both cars stopped:

It didn't really look like a store to me, but here I discovered chikki. I intend to eat chikki forevermore.

Near the store was a blue something, and I asked. It was a little shrine, and the figures were rocks (boulders, kind of) painted (kind of). I didn't take photos because I thought it would be rude, but was told later I could have.

But after he showed Hema and me the shrine (and we took our shoes off to walk around front; Hema says it was a shrine to Mukkai-Devi), the man showed us some dung patties, made for fuel or for flooring.

Then he asked us to come back and look at what was going on behind his store/house, where people were cutting and threshing rice. Cutting it with a sickle and beating it on a stump. Two carloads of unschoolers ended up back there.

My favorite pictures are of inside the store.

Posted by Sandra Dodd at 4:14 AM No comments: