We're at Hema's parents' home in Bangalore. It's wonderful. So far I've had tea, a nap, and watched some cricket. Or I watched the advertisements, and Hema's dad watched the game (New Zealand vs. India).

The ads were mostly for cars, men's scents and internet. One commercial was for "18+"—the deodorant that thinks it's a perfume. They showed four different packages at the end. One had words over it so I couldn't read it, but the other three were called
License to Surprise
License to Date
License to Thrill
I'm assuming it's popular among males who are UNDER 18.

I really liked this detail, on a bottle of liquid hand soap: 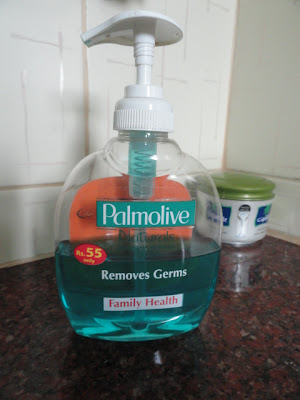 I'm used to anti-bacterial hand soap that kills germs. Here, it's not "anti-" anything. It's very peaceful, in fact. The germs are simply removed. Safe for Jains and Hindus.
Posted by Sandra Dodd at 4:10 AM

Would you please find a way to travel a lot more and post travel diaries like these of everywhere you go? Your descriptions are not flowery or touristy. They're just interesting. I think you could get paid to do this.

Thank you! What a sweet compliment.