It's 5:30 in the morning, but I'm at Hema's, finally. I hope I never plan another middle-of-the-night arrival, as it was way too inconvenient, but I'm grateful that Hema and Pradnya met me at the airport. And though Hema had planned to drive, Ravi hired a driver and a van, which turned out to be a great idea because the plane was late, and Hema fell asleep in the van after a while. But I was wide awake.

We were on a six-lane expressway from Mumbai to Pune, and it was FULL of trucks. I thought I was going to write and say I saw 300 trucks, but that count came and went twice. I saw fifty parked in one place. But most were moving. Most had awesome decorations with paint, some had two tassles, on on each side, hanging from underneath the bed, or patterned mudflaps. One had a pattern in tinsel garlands underneath about a foot in from the end of the bed.

Most of them had a polite message on the back, asking other vehicles to "horn please," mostly, though some said "Blow Horn" or "Honk OK Please" or "Please sound horn." One said "Horn Ideal Please" and this would be in bright colors all across the bumper, and in Hindi, and with other patterned decorations sometimes.

Some of the trucks had the cabs done up like gypsy wagons. Some were very plain (newer trucks, especially. I wanted to know what they were carrying.

We stopped at a truck stop for our driver to use the restroom. Hema was asleep. Pradnya asked if I wanted to go. I would have liked to, but it wouldn't have been good to leave Hema there. I was curious, but also hoping to help facilitate getting my kind welcoming party back home and to sleep.

People were awake, and up, and working, EVERYwhere, especially in Mumbai, but at the truck stop there were shops with snacks and they were open at 4:00 a.m.

The billboards I saw were generally bigger than ours—if not wider, then often much taller—twice or three times the height. One huge set of three billboards had a back like the back of old drive-in movie screens. There were billboards on overpasses, too.

Here's the only image I took of things on the road. Left is the bus that was parked right behind us. In the distance is the filling station/truck pumps, and they were decorated with garlands of tinsel along the roof line, hanging in two loops all along, and bushes on the roadway had tinsel too, looking kind of Christmassy. The upper building had the bathrooms. The lower building is snacks.

Prior to the exciting nighttime journey with the stunt driver who was weaving in and out of these trucks, honking as instructed, the first notable thing I saw after exiting the plane was this, at the bottom of the escalators from the gates: 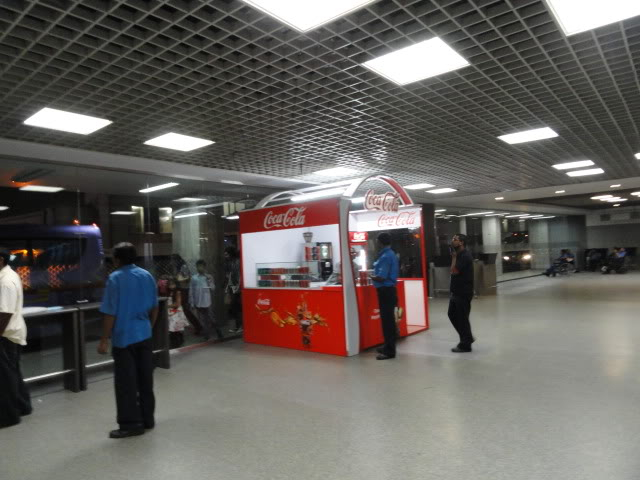 Glad you made it there safely! Hope you catch up on some missed sleep soon. Looking forward to following along here to see just a wee bit of what you're experiencing.

I really like how you capture the essence of travel to/in India. Things like a Coke stand, or how it felt to travel around all the decorated trucks. Not just a dry report, but such great detail.

We are visiting New Zealand in 2012 and your travel blog is an inspiration...there are so many unique things when we travel abroad...I want to remember the little things that make NZ different than home. Thanks for the inspiration!